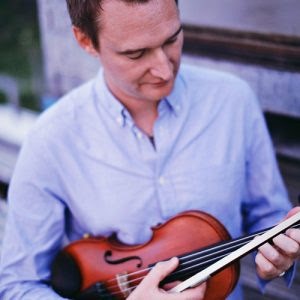 Kevin Henderson comes from the Shetland Islands, one of Scotland´s archipelagos with one of the richest fiddle traditions in the world. He is regarded as one of Shetlands finest fiddle players and is in hot demand playing with some of the best known groups and musicians in the folk music scene. He began playing the fiddle at the age of 9 taking private lessons with highly renowned Shetland fiddler Trevor Hunter and at the age of 10 studied under the late great Willie Hunter, arguably Shetlands finest ever fiddler. He is a founding member of award winning Shetland powerhouse, Fiddlers’ Bid, formed in 1991, has been a member of folk music legends, Boys of the Lough, since 2001, a member of Scottish super group Session A9 since 2004 and co-founded the Nordic Fiddlers Bloc in 2009. In 2011 Kevin released his debut solo album, “Fin Da Laand Ageen” to great critical acclaim. The album was a celebration of Shetland´s traditional fiddle music and featured the fantastic playing of Mattias Pérez from Sweden on guitar and mandola.“Shetlander Kevin Henderson’s opening set with Swedish guitarist Mattias Perez referenced quite a few of the tunes that have become familiar through the group Henderson’s played with since school days, Fiddlers’ Bid. But even without his three fiddling partners, Henderson portrayed all the colour and sheer melodic depth of items such as Da Farder Ben da Welcomer, with Perez providing ultra-sympathetic accompaniments on bouzouki as well as guitar. Henderson’s relaying of background tales enhanced his melodic command and graceful delivery.”

Order now!
1) Send an email to tom@boghat.com to reserve your spots and confirm there is space. (seating is first come. first served but you are guaranteed a seat if you order in advance - NO more standing spots)
2) Tom will reply with payment information: Please pay in advance by check, iPhone CASH app ($TomRota) or Paypal - thomasrota@hotmail.com- (if Paypal, please send as "friends' and family"). If it's too late for a check, you can bring cash to the show - exact change please!
Or you can take your chances at the door but first arrivals get the seats. No refunds unless show is cancelled.
Doors will open at 6pm for seating and dinner. There is a 2 item purchase minimum for these shows at Blue. We encourage you to support the pub by coming early and eating there.
Session after the concert! - usually around 10pm. All are welcome.